Matt Damon shaves his head and gets some truly disturbing hardware drilled into his body in Elysium, the latest but not greatest sci-fi adventure from District 9 director Neill Blomkamp. It's the year 2154 and Earth has been totally depleted of resources. Damon plays Max, a hard-up worker struggling to survive on the trashed planet while the 1 percent thrive on a space station floating above Earth (called Elysium). From the opening sequence when a nun tells young Max he's destined to do something great, you know that's where the movie is heading, but what she doesn't tell him (or us) is that until then, he'll be pretty insufferable. The biggest issue with Elysium isn't the selfish main character, it's that this story has been told before — and better. 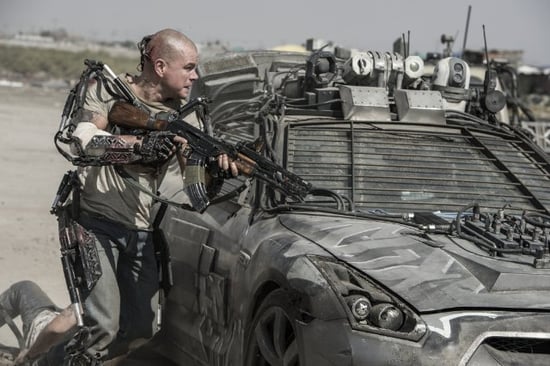 Max drudges through his life content with being one of the miserable many until an accident at his factory job renders him with radiation poisoning. The incident reunites him with an old friend (Alice Braga) whose daughter is dying. He doesn't care about the kid (like, at all) and frankly, his lack of empathy is incredibly off-putting. Max agrees to take a dangerous job from crime kingpin Spider (Wagner Moura) in exchange for an illegal trip to Elysium, where there are pods that can heal him. That's where things get predictably worse for Max, because he doesn't realize power-hungry Defense Minister Delacourt (Jodie Foster) is about to stage a coup on Elysium, and her plans just so happen to conflict with his. The setup is sufficient, but the characters made me care less and less about the outcome as the movie went along. Find out more about what I thought of Elysium when you read more.

The accident shakes Max out of his pretty terrible existence, but the following events enforce that he's kind of a bad person, and it's unpleasant to watch. He's rapidly dying (so he's especially irritable) and in order to keep him functioning normally, Spider's crew drills a horrifying exoskeleton into his body. Once you see the screws turning into his skin, it's pretty hard not to imagine the suit ripping up his body every time he runs, jumps, or even moves. Some of the action sequences are impressive thanks to a nimble Damon, but it's just gross to watch because you can't help but think about how excruciating that suit must be.

Then there's Elysium, the beautiful, innovative space station Max is longing to escape to. I wish the movie showcased less of Earth and more of the glorious Elysium and Delacourt, even if she is mostly stomping around looking cranky. Foster is fascinating to watch, but she's underused, and Delacourt's motivations are never fully explored. Clearly she's been cast as the villain, but there's really no rationale behind her actions.

Mainly, I'm disappointed in Elysium. I don't know if Blomkamp's incredible District 9 set the the bar too high or if I expected some dazzling visuals or a complex social message, but they certainly aren't there. Maybe I at least expected to want to root for Damon's character, but I didn't want to do that. In the end, the movie is simply forgettable. Let's hope the future doesn't look anything like Elysium, because if it does, prepare to be bored.

Jennifer Hudson
Jennifer Hudson Is the Queen Incarnate in These Photos From the Aretha Franklin Biopic, Respect
by Mekishana Pierre 8 hours ago

Product Reviews
The Quest to Fit My Small-Band, Large-Cup Breasts: A 3-Week, 35-Bralette Journey
by Morgan Ashley Parker 13 hours ago