Matt Damon is flexing his action star muscle in the first trailer for Elysium, and this time, he's bald, beautiful, and ready to take on the oppressive forces of the future. It's the year 2154 and there's no war, disease, or poverty — if you're one of the privileged who lives on the space station Elysium. Damon's character Max unfortunately dwells on Earth, where things have gotten pretty bad, especially for ex-prisoner Max, who becomes infected with a deadly toxin. Knowing he could die unless he gets to Elysium, he agrees to go on a mission there to help the people of Earth, even though Elysium's authorities (including Jodie Foster) will do anything to stop him. 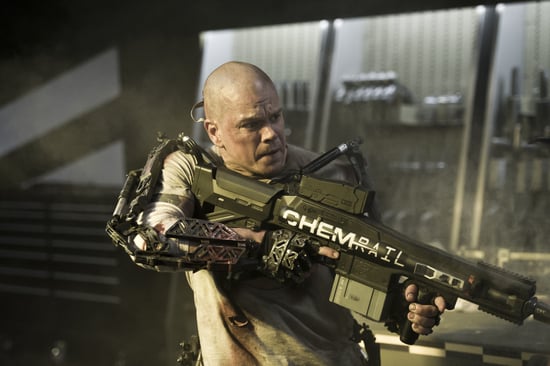 This is the second feature-length film from Neill Blomkamp, who also directed 2009's District 9, and if you saw that, the similarities to the setting in Elysium are unmistakable. Except for the aliens, unless you count the weird armor coming out of Matt Damon's character's skull. I loved District 9 and I love Damon more, so I'm interested, but I wish the sci-fi angle was a little more exciting and fresh. But watch and judge for yourself; Elysium is set for release Aug. 9, and you can watch the full trailer after the jump.