The film industry lost a wonderful asset when James Gandolfini passed away, but fans get to enjoy the talented performer in at least one more movie — the upcoming romantic comedy Enough Said from writer/director Nicole Holofcener. It stars Julia Louis-Dreyfus as Eva, a massage therapist who befriends new client Marianne (Catherine Keener) and simultaneously starts dating someone new (Gandolfini). Over time, she realizes that her endearing new boyfriend is actually her client's ex-husband. As Marianne uses Eva as a sounding board for complaining about her ex, Eva begins to see Albert in a whole new light. Toni Collette and Ben Falcone also costar. 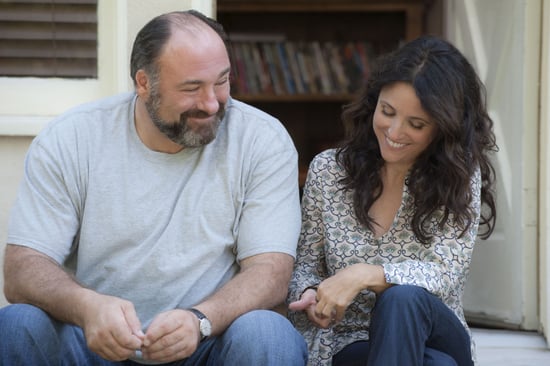 I'm kind of in love with this trailer and not just because of the Frank Sinatra tune. The comic tone seems similar to that of It's Complicated, and the charming love triangle already has me hooked. I'm also enjoying seeing Louis-Dreyfus and Gandofini in roles that I wouldn't necessarily put them in, but that they're perfect for. The movie opens on Sept. 20, and you can watch the trailer after the jump.