Just in time for The Vampire Diaries' second season premiere, I chatted with Katerina Graham, who plays Bonnie on the series. She spilled the beans on whom she thinks Elena should be with and a possible love connection between Bonnie and a certain sexy vampire (though she played it very, very coy). Graham dished on the new werewolves, and also revealed her fever for a young man named Justin Bieber. 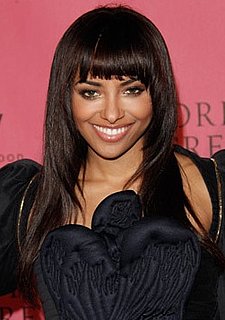 Buzz: I've noticed some sexual tension between Damon and Bonnie.
KG: I don't know what you're talking about.

Buzz: Is there any possibility of a love connection between them?
KG: I don't know . . . that's the answer! Next question, next question!

Find out what other secrets Graham is keeping about Bonnie, the werewolves, and Justin Bieber when you read more.

Buzz: Is there a chance of another love interest for Bonnie then?
KG: I think there's a chance, but do I know if it's going to happen? I don't. [But] hopefully. It would be nice!

Buzz: How will the addition of werewolves affect the show?
KG: It completely affects the show, it alters everything that you might have thought the show was gong to be. Werewolves are going to play such an important part this season. I know that notoriously vampires and werewolves don't get along, so that creates a whole other conflict for everyone to deal with, and then Katherine's back, that's a whole other thing. It's so interesting to see how they're all playing with each other. And I don't think any of them are going to play nice.

Buzz: Will Bonnie be discovering more of her powers?
KG: Absolutely. She also discovers things she can do easily and certain things she's learning and still developing. Over time we'll discover more of her abilities, which is always fun for the fans to see.

Buzz: Will we see Bonnie happy again?
KG: Yeah! She's trying. I think if you lose anyone you're going to be bummed out, and that's OK. She's a bit edgier this year, definitely, but she's still got the sense of humor and I always like to find the fun in the scenes.

Buzz: So spill, are you Team Damon or Team Stefan?
KG: I would love to see Elena with Stefan because he really loves her. [It's a] no boundaries kind of love, and I believe in that and I believe in being with the people that are like that. I think that Damon hasn't quite gotten over his ex yet. But we'll see; plotlines can change and I can think that by the end of the season, I could think that Stefan hasn't earned Elena. Damon hasn't earned Elena. I think he's got a lot to get over, especially the things that he's done to Jeremy and the things he's done to the family, and the things that he's done to me. We'll see. He could turn out to really prove himself. I think everyone deserves another chance.

Buzz: Does Bieber watch The Vampire Diaries?
KG: He's very aware of it! I don't know how much time he has to watch TV, but he's aware of it. I think he would make a great vampire.

Buzz: It would be awesome if you could get him to guest star.
KG: I know, fingers crossed!

Image Source: WireImage
The Vampire DiariesTVKaterina Graham
Around The Web

Netflix
This TikToker Imagines Beth Harmon Playing Other Games, and Checkmate, She Wins
by Kelsie Gibson 1 hour ago