The bad boys of The Expendables are back in the trailer for the sequel, and this time they have a hot, new secret weapon: Liam Hemsworth. Given that the original film features action stars of many decades (including Sylvester Stallone, Arnold Schwarzenegger, Jason Statham, and Chuck Norris), it seems fitting that they've made room for the Hunger Games star as their latest edition (fun fact: Hemsworth was originally cast in the first film, but his part was cut). In The Expendables 2, Hemsworth joins the gang as a sniper named Billy the Kid as they face down a villain played by Jean-Claude Van Damme. 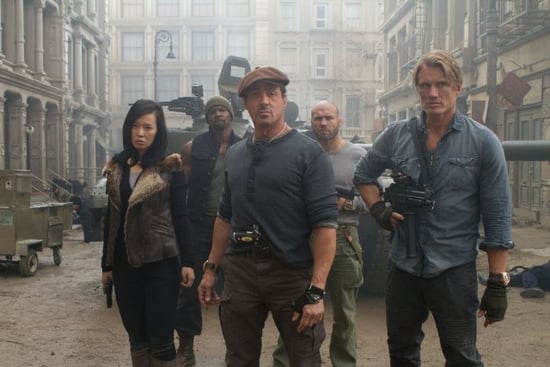 Don't try to follow too much of the story in the trailer, though; it's mostly a mélange of shoot-'em-up sequences, fistfights, and explosions. It's not that it's not fun, however, and it's definitely worth the watch to see Hemsworth in action star mode. The movie comes out on Aug. 17, and you can check out the trailer when you read more.

Movie Trailers
Blink and You'll Miss the Diabetic Kid in Pixar's Turning Red Trailer, but It Left a Major Impact on Fans
by Kate Schweitzer 2 days ago