In The Perks of Being a Wallflower, out Sept. 21, Ezra Miller plays supporting character Patrick, a gay teen who helps Charlie (Logan Lerman) adjust to life in high school. When I visited the Pittsburgh set last year with a few reporters, we sat down with Miller to talk about his role and his experience filming the movie. Miller talked about why Patrick's sexuality doesn't matter to the formation of the character, explains how he feels about being part of the adaptation of such a beloved book, and sings the praises of his lovely costar Emma Watson, who plays his stepsister. 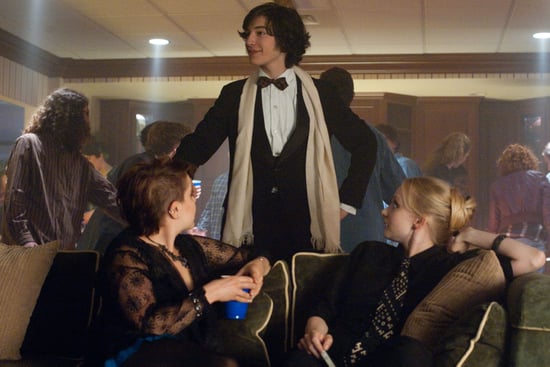 What do you like about your character, Patrick?
Ezra Miller: I like how vivacious and unapologetic and proud he is. And I like more than anything that he is a real, sympathetic individual and that — despite the fact that the character is gay — that plays really no part in the formation of the human being. I just remember reading Patrick and realizing that, 'Oh no. This character has no basis in being gay.' That he's a fully formed being and that is an aspect of him, as [it] is an aspect of us all. Our sexuality — it's not the defining quality. It's just one element.

Did you ever think about playing Charlie?
EM: No. It's funny because when I read this book, I was 13 years old and, you know, when a 13-year-old boy reads that book, [he's] identifying with Charlie. And so, initially, there was maybe some sort of thought of like, 'Oh, that's the character that I remembered most immediately,' but no. When the script came around, it was Patrick and it had to be. No, no, [there was] never a real consideration of wanting to play Charlie. And when I got the script, Logan "The Ultimate Baller Champion" Lerman was already attached, so that was just sort of a thrilling, obvious thing. And at that time, there was no way to possibly expect what he was going to do with his character, and I already trusted him fully.

In the book, Patrick and Sam have a deep connection, so how was it working with Emma and establishing that?
EM: Oh, man. Far too easy! Unjustly easy! They should've thrown me someone a little harder to handle so it could've been a bit of a challenge. Emma's one of the most severely mind-blowing forces of my peer group in acting right now, and I think based on what's come before this, people just have no idea what she's capable of. She has become, in these short weeks, one of my dearest friends — I think that will be the case forever — and she is the type of artist who is going to make her true self known in time, and I personally look forward to watching an entire population of Harry Potter fans get their minds twisted into small, pretzel-ish knots over what this girl can do. That's exciting to me.

Read more of Miller's interview to find out just how big of a Harry Potter fan he is after the jump.

Were you one of those Harry Potter fans before signing onto this movie?
EM: Yes. Massive. Massive. [I] Read Harry Potter like scripture or something. When I was a kid, I had a ritual, which in hindsight makes me look like an unhealthy, unattended kid. I must've listened to each of the Jim Dale voice recordings of the Harry Potter books maybe a couple hundred times each. And that means putting in the hours every day, and that's what I did after school, just listen to those books on repeat. Here's something that's very exciting about Emma — truly being such a magical artist — is that that book strikes a core of human beings all over this world. We all feel innately that we are capable of very, very, very wonderful, magical things, and that's not validated in this culture, in this society. And thus the ration of people who are actually acting upon these abilities that we have gets smaller and smaller, but the reality is that we have those capabilities and that Emma, who plays Hermione Granger, has those capabilities as an artist. She is what we look at and say, "Magician." You know? She is that. So yeah, Harry Potter was important for me, but fortunately it hasn't even crossed my mind at any point working with Emma. No, not even for a second, because she is quite her own entity.

Have you read the book, and do you feel pressure to live up to it?
EM: What I feel is a great honor and a great privilege to be able to be involved in something that is of such deep, seminal importance for my generation. And no, I don't feel a pressure. I feel a necessity, which, as an artist, is what I want. I think necessity is the mother of all invention. We need — as artists — that mother to validate our actions. And yeah, the very wonderful relationship between the readers of this book and this project, it's only a happy flame beneath us. It's not some sort of massive something that threatens to crush us. Or at least that's how I felt. I've just felt sort of spurred on by the fans, not deterred or intimidated.

Movies
In the Heights Is Full of Lin-Manuel Miranda Easter Eggs, Including a Clever Hamilton Nod
by Karenna Meredith 6 hours ago

Movies
Will There Be an In the Heights Sequel? The Cast Is Keeping Their Fingers Crossed
by Monica Sisavat 11 hours ago