Robert De Niro playing a mobster is an act that will never get old, even if the movie he's in isn't quite up to snuff. De Niro puts on the gangster hat one more time for The Family, a flawed but enjoyable film about what happens after your mob days. Giovanni "Gio" Manzoni (De Niro) and his family have been relocated to a small town near Normandy, France. Having been in the witness protection program for over a decade, Gio has developed some serenity over the years, but his wife, Maggie (Michelle Pfeiffer), and their kids, Warren (John D'Leo) and Belle Glee's Dianna Agron), are another story. The whole family is calm and collected on the surface, but Maggie is prone to blowing up supermarkets (with the snooty locals inside) while Belle and Warren take turns busting kneecaps at school. They're an interesting, if underdeveloped, bunch. 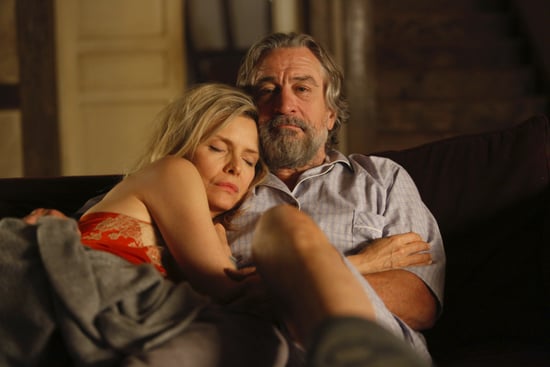 The film's tender family dynamic is actually pretty cute, it's just the conflict that feels forced. The Manzonis may be far from Brooklyn, but they're still not safe when their past comes knocking. A kingpin in prison is still holding a grudge against Gio, and through a series of impossible coincidences, he finds out where the Manzonis are hiding. The discovery is beyond the limits of my imagination, and it's not the only outlandish twist that had me rolling my eyes. But there are some things that redeem The Family. Keep reading to find out what they are.

Agent Robert Stansfield (Tommy Lee Jones) and a couple of guards have been protecting the Manzonis for years, and director Luc Besson smartly explores how their relationships with the family have grown over time. Maggie wins the bumbling agents over with delicious food while gossiping about the neighbors, and Gio and Robert, once on opposite sides of the law, now trust one another. These relationships give us the film's best moments.

Eventually, The Family wanders from the relationships to focus on some half-baked action, but the film has its leads to rely on. It's impossible to look away from the commanding De Niro, even if he does spend most of his time shuffling around in a bathrobe. Pfeiffer is equally magnetic, though her Brooklyn accent needs a little work. D'Leo is one to watch as a budding mafia man and Agron, well, Agron does the best she can with a melancholy teen character who takes some unexpected and relatively unexplained turns. The Family is quirky and watchable, but it's also one offer you can refuse.