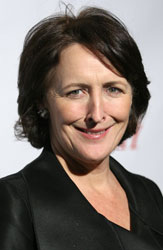 Two of my very favorite things in the world are about to collide: Harry Potter and True Blood! Fiona Shaw, best known as Aunt Petunia Dursley from the Harry Potter films, is joining the cast of True Blood as a series regular. She's playing Marnie, a palm reader who becomes possessed by the spirit of a powerful witch (good news for those of you who were tiring of all those other creatures on the show). Though the character was supposed to be a bit younger in the book, the age is being tweaked so Shaw can portray her. Fans of the book series — are you happy with Shaw as Marnie?