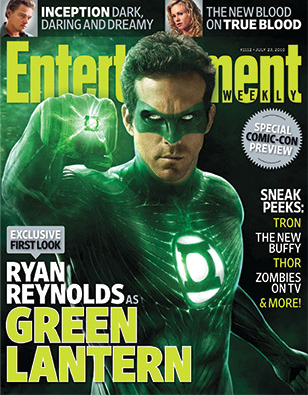 This week, all the Green Lantern-related buzz has revolved around two things: the film's presence at Comic-Con next week, and Ryan Reynolds's injury on the set. Luckily, Reynolds is reportedly recovering nicely, and EW released this first photo to generate even more buzz about the film before next week. I have to say — not bad, not bad at all (especially for a CGI suit)! I'll be one of the thousands of fans trying to squeeze my way into the panel to see the first exclusive footage from the movie at Comic-Con next week, so stay tuned. Until then, what do you think of Reynolds the superhero?