The trailer for Frankie and Alice examines the inner psyche of a stripper named Frankie (Halle Berry). Frankie's been having blackouts, waking up in places she doesn't recognize, and generally just acting not like herself. The preview poses questions like whether not she's crazy and what crazy actually means, but Frankie's diagnosis goes far deeper than that — she has multiple personality disorder. 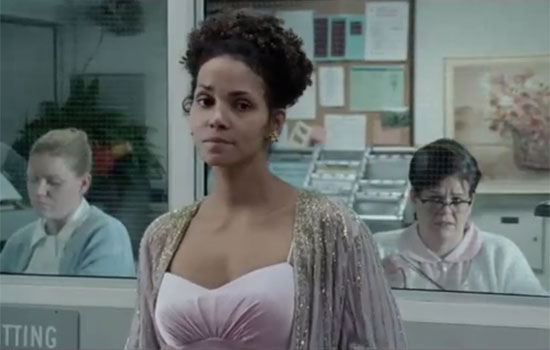 Her alter ego (whom I can only assume to be Alice) is more straitlaced, no-nonsense, and, appears to be white. The preview focuses more on Frankie's interactions with her doctor (Stellan Skarsgard) than on what brought on the added personality (though it's hinted that it had something to do with her mother). Though this first look didn't exactly reach out and grab me, I'm definitely interested in this project to see how Berry tackles playing opposite herself. The film will be released just in time for award season, so take a look and tell me if you think Berry has a chance at her second trophy when you read more.

Halle BerryMoviesStellan Skarsgard
Around The Web

Sarah Paulson
Freaked Out After Watching Run on Hulu? Let's Discuss That Twist Ending
by Camila Barbeito 4 hours ago

Holiday Entertainment
I'll Say It: Abby and Riley Should Have Ended Up Together in Happiest Season
by Grace Orriss 5 hours ago

Holiday Entertainment
If You've Seen Happiest Season, You Know Who the Real Hero Is: Jane
by Maggie Panos 8 hours ago