The show is over and trophies have been handed out at the 2010 Critics' Choice Awards, but the night wasn't without its share of surprises. Avatar managed to run away with a record-breaking six wins (most in the technical categories), but it lost out in the two major spots of the night to a much smaller film — The Hurt Locker. Kathryn Bigelow's tale of a bomb squad unit in Iraq not only garnered her a Best Directing win, but the film also took home the biggest honor of the night, Best Picture. 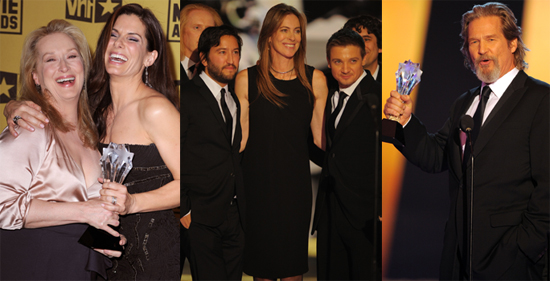 Also unexpected? A tie in the Best Actress category again this year (just like last year!), but this time between Sandra Bullock and Meryl Streep.

I'm curious to see if these honorees are any indication of what might go down at this Sunday's Golden Globes (so far, my predictions haven't been as spot-on as I had hoped!). Not to mention, the past three films to earn Best Picture at Critics' Choice have all gone on to win the Oscar, so this may be an early sign of what's to come in March. Check out the full list of winners when you read more.

BEST ADAPTED SCREENPLAY
Jason Reitman and Sheldon Turner, Up in the Air