What a night — and it was groundbreaking to boot! Avatar may be the big gun when it comes to special effects, but it was Kathryn Bigelow's The Hurt Locker that swept the two major awards of the 2010 Oscars with best picture and best director. Her win marks the first time a female director has ever won the honor, and I couldn't help but let out a gleeful "yes!" when her name was announced. 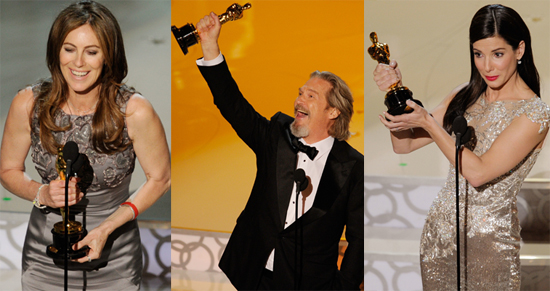 The rest of the categories pretty much stuck to the favored picks with Jeff Bridges taking the stage for Crazy Heart, Mo'Nique for Precious, Christoph Waltz for Inglourious Basterds — and in a tearful acceptance speech, Sandra Bullock accepted her best actress win for The Blind Side. That was one of my favorite highlights of the evening (check back later for the rest), but let's go ahead and cover all the night's winners. Head over to my Oscar polls to vote on whether you think each is deserving, but I've got the entire list for your perusal when you read more.

BEST ADAPTED SCREENPLAY
Geoffrey Fletcher, Precious: Based on the Novel "Push" by Sapphire