One of Comic-Con's most anticipated panels was Game of Thrones, and it did not disappoint. The showrunners, author George R. R. Martin, and lots of cast members were on hand, including Kit Harington, Peter Dinklage, Emilia Clarke, and Rose Leslie. Obviously, the Red Wedding was a hot topic of the panel, especially since Richard Madden and Michelle Fairley were also there. It wasn't just a big grief counseling session, though — there was celebration, too. Dinklage and Clarke were praised for their recent Emmy nominations, and there was no shortage of surprises, either. We were treated to a funny and sad "In Memoriam" video — and halfway through, former cast member Jason Momoa ran on stage and gave Clarke a big kiss. Keep reading to get more details on those moments and the other highlights! 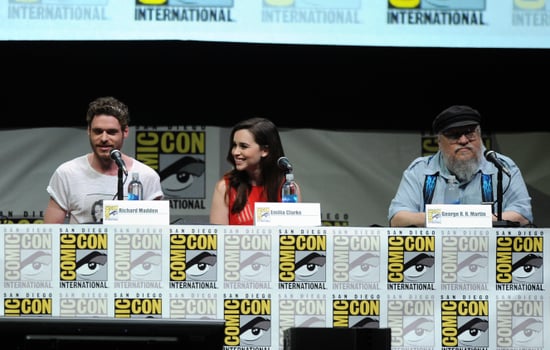 Image Source: HBO
Game Of ThronesComic-ConTV
Around The Web