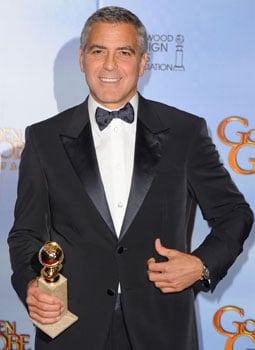 George Clooney brought his charming smile, sense of humor, and girlfriend Stacy Keibler backstage to the press room after winning best actor in a drama at the Golden Globes in LA this evening. His The Descendants also took home best dramatic picture, so it was a triumphant night for George. In between his typical funny quips and jokes, George chatted about going up against his friend Brad Pitt this award season and what he thinks fellow nominee Ryan Gosling is getting up to in Thailand. Check it out:

On any award season rivalry or wagers with Brad: I’ll tell you quite honestly: the truth of the matter is, Brad is my friend. I've never felt competition with him. I've only felt a great deal of friendship and support from him and for him. We don’t wager. We don’t bet. We just look at each other and slap each other on the back and wish each other the best because he's a friend.

On why people connect to this film: Alexander Payne knows how to tell a story. It's a coming-of-age film for a 50-year-old. A lot of us have dealt with issues or people like that. I have people coming up to me all the time. I think it touches a lot of people like that.

On Ryan Gosling being a no-show: He's in Thailand or something, and you know what you do in Thailand. He wrote me a nice email this morning and I found out that he wasn’t able to be here. It happens, you gotta work. He's gotta make a living, he's a struggling actor.

On adopting dogs: I've always had dogs. I've almost always had them out of the pound. Seems like a good place. They have a lot of them. It brings me a lot of joy to do it and they seem like the happiest dogs in the game. I only have one, but he eats for, like, four.

On the honor of being nominated: Both of these films [The Ides of March and The Descendants] being nominated, was three years of work and three years of things that mattered to me. What I really remember and what I do this for is filmmaking. I love being a part of film. I know film history. In 1976 there was All the President's Men, Bound for Glory, Network, Taxi Driver and there was Rocky, which won. But I remember all five of those films. The acknowledgement is unbelievably nice and complimentary, but that’s not why I do it.

Memorable moments from tonight's Globes: Here’s two moments that really struck me: I am in awe of Sidney Poitier. When he walks out on stage and he’s there to present, and he gets the longest standing ovation, earned, I found that to be very emotional to everyone in the audience. And the other is Jane Fonda in that dress. My god. She looked great, didn’t she?

On Ricky's hosting: I thought he did a great job. I think tonight was a much tougher gig because there's so much build-up to it. It's almost like how rough can you go at that point. I thought he handled tonight like a proper good host, again. It was fun. People were expecting a lot of trash talk. He did what he does, and he does it well. He makes me laugh.

On Mitt Romney's anti-gay stance: Well I’m not much concerned until there is an actual nominee, but I think it’s the wrong side of history. I think everyone understand it's the last leg of the civil rights issue. It's certainly not the wedge issue it was in 2004.