Glee's word of the week, it seems, is "garbage." According to Sue, the Cheerios' homage to Britney Spears is garbage, Cassandra thinks Rachel's attempt at being sexy is garbage, and Mr. Schue punishing Jake for starting a fight that ends with someone's face in a vat of peas and carrots? Garbage! But we'll get to all that. This episode is all about Brittany S. Pierce . . . and Marley, Jake, and Rachel. 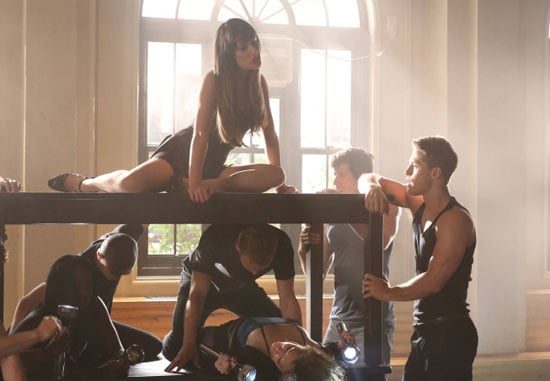 The episode kicks off with Sue dismissing Brittany from the Cheerios, her F- average finally catching up to her. Mr. Schue decides to bring Britney Spears Week back to McKinley High in an effort to cheer Brittany up, or at least get her to brush her hair again. Meanwhile, over in NYC, Rachel is dealing with Cassandra essentially accusing her of being 100-percent unsexy, and — ugh! — this completely hot guy hanging all over her. Let's talk about the good, the bad, and the in-between when you read more.

Some questions I thought of while watching this episode: Is there somewhere I can get 70 ounces of espresso? Will my Siri respond if I start calling her Kiki? Can we get some more Unique up in here? How much free time do NYADA students have that they can help Rachel choreograph an entire routine just for kicks? What did you think of the episode? Let us know your thoughts, and enjoy the playlist of all this week's songs listed below!

Netflix
The Pogues Might Be Going to the Bahamas, but Outer Banks Season 2 Wasn't Filmed There
by Grayson Gilcrease 10 hours ago