Glee's tribute to late cast member Cory Monteith aired this week, inspiring both heartfelt tears and wonderful memories of the gone-but-never-forgotten Finn Hudson. "The Quarterback" doesn't explain how Finn dies, but as Kurt notes, "Everyone wants to talk about how he died, but who cares?" Instead, we pick up three weeks after his funeral as the old gang returns to Lima to pay tribute to their former glee club leader. All the current cast members are present, but I appreciate that the episode really focuses on the characters that grew up on the show with Finn, like Kurt, Mercedes, Santana, Puck, and, of course, Rachel. 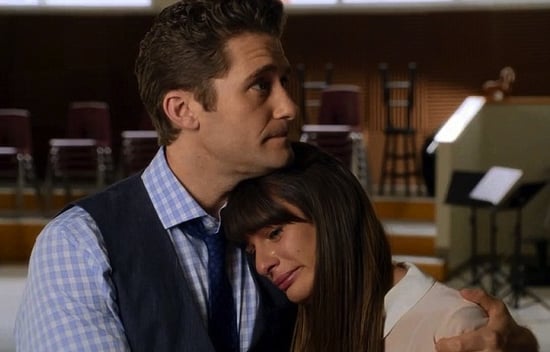 We've seen characters die on television before, but this is a very special and raw episode, because not only are the characters mourning their peer, the actors are really coping with the death of their friend. Finn's presence is everywhere, from his letterman jacket to his memorial in McKinley High's hallway to all the songs dedicated to his memory. It made me remember the good times, the bad times, and everything in between, and though it did make me cry — a lot — I think "The Quarterback" provides a great deal of closure on Finn's, and Monteith's, passing. Let's take a minute to talk about the most heartbreaking moments of an intensely emotional episode after the jump.

What did you think of "The Quarterback"?