This week's Glee kicks off with a goose-bump-inducing rendition of Whitney Houston's "How Will I Know" by Rachel, Mercedes, Santana, and Kurt, and it's just the beginning of an episode full of some of my favorite performances of this season. The kids are still grieving Houston's death, and Emma points out that it's partially due to the fact that they're having a rough time dealing with the impending transition of graduation. Schue suggests a Whitney-themed assignment, and we all benefit, getting some sentimental but hugely entertaining numbers. 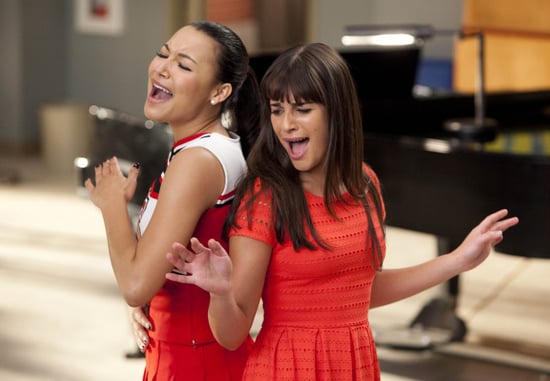 A couple of relationships are tested, but I'm most pleasantly surprised by the blossoming of a new romance that seems to come out of nowhere. Let's talk about those moments and more after the jump.

Though Kurt and Blaine kiss and make up and the last song is upbeat, this episode is tinged with bittersweetness. It's not even over the sad passing of Whitney, which is really just brought up in the beginning, and then takes a backseat to each character's personal drama. What did you think of the episode? Did you like the Whitney songs, and what did you think of the sudden Quinn/Joe romance?

HBO
Obsessed With The White Lotus? You'll Love These Photos of the Cast Hanging Out
by Perri Konecky 10 hours ago

Madison Bailey
Listen Up, Pogues: JJ and Kiara Are the Real Outer Banks Endgame Couple
by Alyssa Grabinski 10 hours ago

Selena Gomez
Why Do Shows Still Think It's OK to Make a Joke About Selena Gomez's Kidney Transplant?
by Kelsie Gibson 13 hours ago