Are you ready for your Twerk-torial? That fun portmanteau comes courtesy of Mr. Schue, who leads the kids to explore their Miley side this week on Glee. Not everyone is thrilled with the lesson du jour, in fact most of the kids are having a pretty tough time lately. Rachel and Kurt are trying to shock themselves out of grief by abusing a finely aged bottle on Limoncello, and the Great McKinley Bathroom Gender Riot of 2013 is raging. Yes, it's quite the scene. 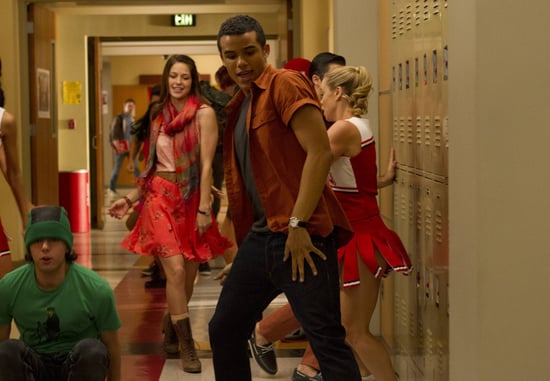 "The End of Twerk" plays kind of like this year's VMAs: some parts are shocking, there's a lot of music, and, naturally, way too much twerking. The group even has a go at "Blurred Lines" and jilted lady Marley performs a depressing rendition of "Wrecking Ball." But let's not put on our sad faces just yet. To get all the juicy highlights, just read on.

What did you think of the episode?

TV
The Mandalorian: Did You Catch This Fun Cameo in the Season 2 Premiere?
by Amanda Prahl 4 hours ago

Alicia Keys
Feel Inspired by Alicia Keys and Brandi Carlile's Duet of Their New Song, "A Beautiful Noise"
by Brea Cubit 7 hours ago