With a title like "Naked," I was expecting this week's Glee to be a lot more racy. While we do get to see some spectacular pecs (lookin' at you, Sam), the episode's theme also refers to emotional vulnerability. Marley loves Jake but is afraid to tell him, Artie is ashamed of his body, and while Sam isn't ashamed of his body at all, he is terrified that it's all he's got. Yes, it's a very special episode of Glee, and one of the cheesiest I've seen in a long time. 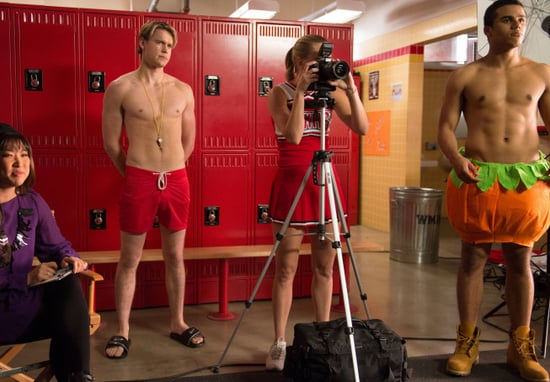 The Warblers have been disqualified from sectionals ('roid rage), and New Directions is clear to take their place. To help raise money, Tina suggests a Men of McKinley calendar, prompting the boys to try on a variety of sexy, seasonal costumes. Meanwhile, Rachel's having a crisis of conscience when a peer asks her to go topless for a student film. Let's break down the highlights and listen to a playlist of tracks from the episode after the jump.

What did you think of the episode? Were you at least a little bit curious about Sue's centerfold? Will Santana move to New York?