Call it throwback Thursday, because this week's very special holiday Glee episode gives us a blast from the past as Artie pulls an It's a Wonderful Life and dreams that he can walk. A couple of characters we haven't seen in a while show up, some bearing fake babies, and we see what a miserable place McKinley High is sans song and dance. Meanwhile, back in reality, Kurt's dad comes to New York for a quick visit and brings along a Blaine-sized surprise. Sam and Brittany believe the apocalypse is imminent and make some rash decisions — well, almost — and the Puckermans get some quality time together. 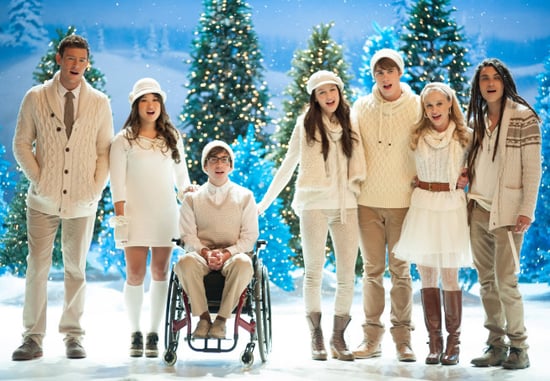 Ever since checking out all the behind-the-scenes pictures of "Glee, Actually," I've been really excited about this episode. Though the stories feel a little disjointed to me, it's undeniably festive. Get my take on all the highlights from the episode and a playlist of the holiday tunes after the jump.

What did you think of the holly, jolly episode? Was it all over the place, or just right?