It's prom time again on Glee, and this year's festivities contain just as much drama as last year's, plus infinitely more dinosaurs. That's right — Brittany decides to exercise her presidential rights in order to celebrate the peace that apparently once existed between cavemen and dinos. It doesn't make much sense, but it does give Brittany the opportunity to prance around in a Flintstones-esque getup to Ke$ha's "Dinosaur." 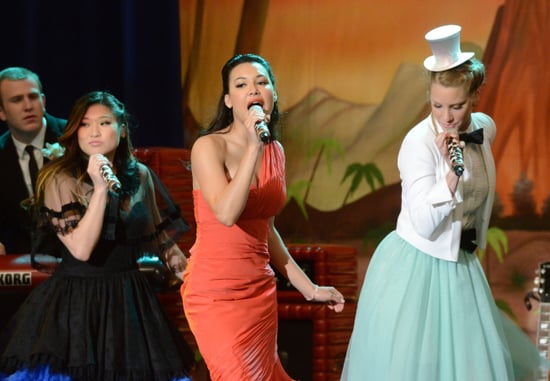 It wouldn't be prom without a heated race for king and queen, and the usual suspects have their eyes on the prize: Quinn, Santana, Kurt, and Brittany. Only Quinn uses questionable methods in hopes of winning the crown, but once again, there's a shocker when the envelopes are finally read. It really feels like we're inching closer to that bittersweet Glee graduation, so let's recap the episode when you read more.

How did you feel about the second helping of prom — and which prom episode do you prefer?