Can you hear it? That faint harmonizing? That's the sound of Glee's evolution. Torches are being passed, roles are being cast and redefined, and fresh blood is taking over McKinley's stage. This week's episode ends Glee's long hiatus, and everyone is feeling the sting of change, especially Blaine, who's experiencing his first epic heartbreak after ending his relationship with Kurt. But enough sadness. There's a musical to cast! Now that the New Directions' first class has moved on, the club has to find some new peeps to put on the best rendition of Grease ever! Good thing they'll be under some experienced tutelage. 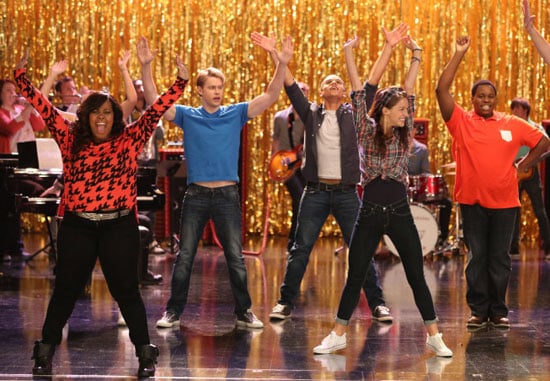 That's right, not only is Finn returning to his old stomping grounds, but also, he and Artie have recruited some old friends to assist with the audition process. Though some familiar faces returned, this week's episode really belongs to the new kids on the block. Jake and Marley's flirtation hits a speed bump, and it's not just Kitty. Let's break it down and listen to all the songs from the episode after the jump.

Are you happy with the way the judge's panel cast Grease? Will Mr. Schue and Emma's relationship survive long distance?

HBO
Obsessed With The White Lotus? You'll Love These Photos of the Cast Hanging Out
by Perri Konecky 9 hours ago

Madison Bailey
Listen Up, Pogues: JJ and Kiara Are the Real Outer Banks Endgame Couple
by Alyssa Grabinski 9 hours ago

Selena Gomez
Why Do Shows Still Think It's OK to Make a Joke About Selena Gomez's Kidney Transplant?
by Kelsie Gibson 12 hours ago