Glee's season four season premiere title, "The New Rachel," is a clever nod to not only the fact that Rachel is adapting to her New York surroundings, but also at how now that she's gone, McKinley High's gotta find a great soloist. It's just a reminder that a new year has begun, and the times, they are a changin'. This is the first season in which many of the show's original cast members have had to move on, so we've gotten a crop of new characters. You can't hang around your old alma mater forever — just ask Kurt. Even though the stars are (temporarily) gone, this episode recaptured the magic that I felt when I watched the series premiere years ago. It's a fresh start, and I have high hopes for this new beginning for Glee. 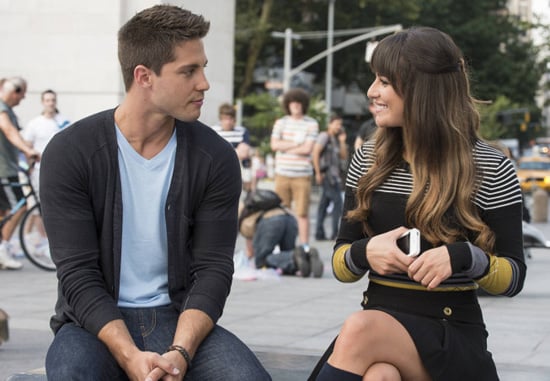 As usual, the new season picks up the Fall after the finale. Rachel is attempting to impress her vicious teacher (Kate Hudson) at NYADA, and the remaining glee-clubbers, fresh off their second Nationals win, are enjoying life at the top of the social ladder. Let's discuss the highlights of the Glee season premiere when you read more.

How do you feel about the premiere? Do you think Cassandra July has it out for Rachel, or does she just see her potential? Were you also blindsided to hear Tina and Mike are over? What do you think of the newbs? Check out all the songs from the episode below!

Netflix
You: No, Madre Linda Isn't a Real Place in California, but It Does Have a Clever Meaning
by Njera Perkins 14 hours ago

Music
Adele Is Giving Us a TV Concert Special and an Oprah Interview in 1 Night — We Can't Wait!
by Naledi Ushe 18 hours ago