This year's Golden Globe winners have all been named, and while there were plenty of folks we expected to see up on stage, there were a few people we were surprised to see taking home awards. The TV categories seemed to have the most dark horse winners, particularly in newbies Laura Dern, Kelsey Grammer, and Matt LeBlanc, who beat out favorites like Bryan Cranston and Tina Fey. There were also a couple interesting movie winners as well, like The Adventures of Tintin for best animated film and best director Martin Scorsese, whose win was only surprising because it was for his first family film Hugo. Did any of these winners surprise you? Vote below, or chime in with your own answer! 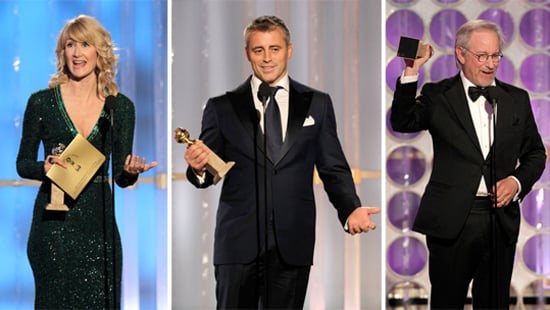 Music
How Can Anyone Deny That Ashanti Is the Lady of Soul After This Greatest-Hits Performance?
by Njera Perkins 22 hours ago

Channing Tatum
Channing Tatum Will Return For a New Magic Mike Movie on HBO Max!
by Perri Konecky 23 hours ago