In The Internship, Vince Vaughn and Owen Wilson try to get jobs at Google, and the movie gives us a good look at the inner workings of the tech giant. Of course, it's not the first time Hollywood has explored a huge Silicon Valley company — in 2010, The Social Network gave us a peek at how Facebook was (controversially) started. They have more in common, including an actor, but how else do the films stack up? We've broken it down below. 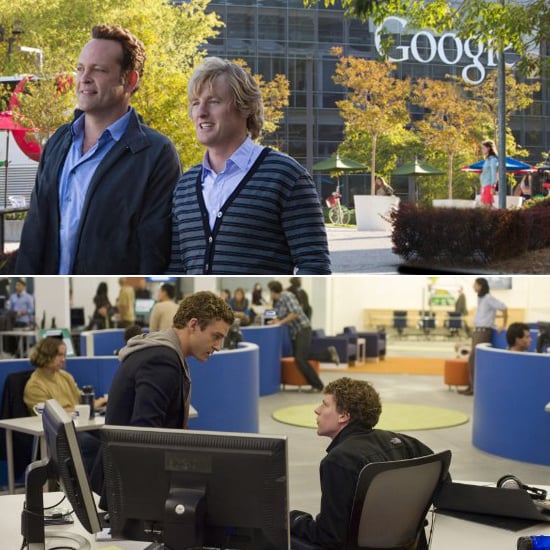 Max Minghella is in both movies.
In The Social Network, Minghella plays Divya Narendra, the partner of the Winklevoss twins who sues Mark Zuckerberg. In The Internship, he's also the nemesis of the main characters. As Graham, he's a fellow intern determined to beat Billy and Nick (Vaughn's and Wilson's characters) to a Google job. His part is bigger in The Internship and, honestly, sexier: he gets to use his British accent. Long live the tech company villain!

The Social Network is inspired by true events.
The Social Network's veracity may be disputed by some, but it is based on real people and events. The Internship is a work of fiction, and while there is an internship program at Google, I doubt very much that real interns have to play a game of Quidditch as a challenge, as Billy and Nick have to do. But the brainteaser question they're asked in their interview? That's one of Google's old hiring practices, which is actually banned now.

We get to go inside Google, but not Facebook.
Both Facebook and Google have a college-like atmosphere, but only The Internship goes deep inside Google. And it is a lot of Google: its campus grounds, driver-less cars, nap pods, slides, free food, the works. You get a pretty good idea of the office culture, but in The Social Network, we only see an early version of the Facebook office.