Usually it's the season finales of Grey's Anatomy that leave us in the lurch, but this week's episode has its very own jaw-dropping cliffhanger. As the residents scramble to figure out whether they will stay in Seattle or move on to greener pastures, every character on the show has something to ruminate on. The party line this week comes from Dr. Webber, who says, "Make sure your ringer's on," as each phone call is another potential career offer. 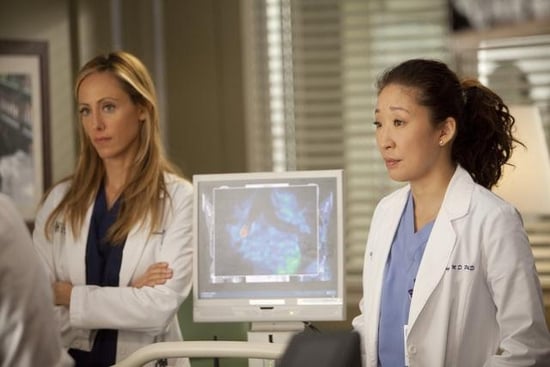 There are major life changes afoot for the doctors who are staying put too. Mark is at a standstill trying to decide between Lexie and Julia, Owen's love life hangs in the balance as Cristina makes plans, and Bailey is shocked not once but twice by news from Ben. Whatever happens this week, the season finale promises to shake everything up, so basically, all bets are off. Let's get into the nitty-gritty when you read more.

Of course, the real kicker happens in the final moments of the episode, when it goes from Grey's Anatomy to Lost in the blink of an eye. Most of the doctors are on a plane to Boise, which inexplicably crashes in the middle of the woods, leaving many of the doctors strewn on the ground. It's setting the groundwork for what looks to be yet another heart-wrenching season finale, which promises that one of the doctors won't make it out alive. We already know that most of the principal actors have renewed their contracts, but Lexie and Mark are definitely still in the lurch, as well as Callie and Arizona. And come to think of it, there was that big speech between Callie and Arizona about never leaving each other. Who do you think will die? And who will you miss the most?