It's a thunderous episode of Grey's Anatomy this week, and I'm not just talking about the weather. Derek, Meredith, Arizona, Callie, and Cristina get ready to implement some radical changes at the hospital, though none of them is really ready for what's about to happen. Bailey becomes increasingly fed up with what's been going on at work, and Owen is left in the dark when his friends drop a huge bomb on him at the end of the episode. 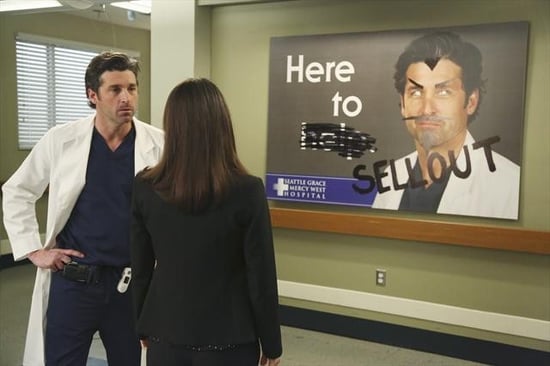 On the romance front, April and her paramedic discover that they have more in common than they thought, and Alex's feelings for Jo are becoming more apparent (at least to the audience). Let's break it down when you read more.

What did you think of this week's episode? Did you laugh when Webber catches Shane in the act of defacing Derek's poster? Will Bailey quit before she finds out what's really going on? Sound off in the comments.