The doctors of Seattle Grace take a stroll down memory lane this week on Grey's Anatomy when George O'Malley's mother, Louise, returns as a patient. While it's been awhile since George's mere name was uttered through the hospital halls, as Alex so insensitively points out, her presence brings forth tender memories that most of the doctors would rather not think about. 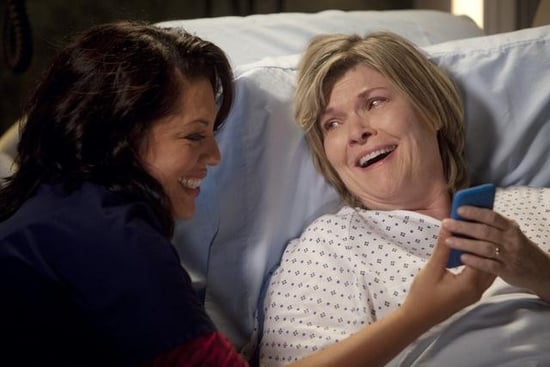 A miracle also arrives in the form of a box — a pumping heart in a box, to be exact. The live organ is harvested for transplant but becomes sort of a career whisperer for Cristina and Jackson. With Mama O'Malley back in the mix and the powers of the heart in the box, I thought this episode lightly tugged on the heartstrings but could have been way more emotional. Though, I really loved how Callie "came out" to her ex-mother-in-law. Ready to break it down? Just keep reading.

Between Peds prospect Polly and the plastics posse (they sure love their alliterations), what did you think of this week's episode? Will Teddy stay strong? Will Lexie and Mark finally get back together? Leave your comments below!

by Amanda Prahl 46 minutes ago