Welcome back to TV, Neve Campbell! This week's episode of Grey's Anatomy is all about the interns, but we also meet Campbell as a new member of the Shepherd clan: Derek's sister, Lizzy. She doesn't show up until the end of the episode, though, so let's rewind back to those interns. It's been hard for me to care about the new crop of surgeons at Seattle Grace this season, but I may be starting to warm up to a couple of them, namely Dr. Ross and Dr. Wilson (aka "Princess"). 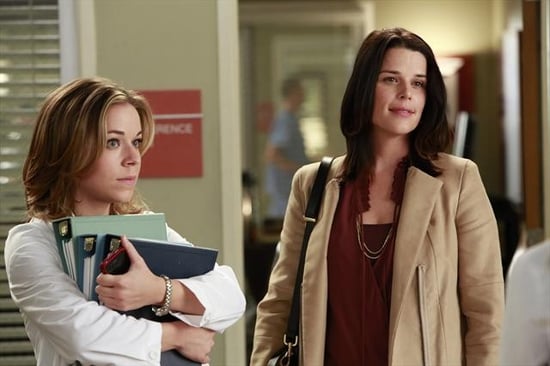 The rest of the major players get cast aside in favor of seeing the interns taking in the hospital in super slo-mo — except Meredith, who has her pregnancy secret leaked by intern Heather. Let's get down to business when you read more.

How did you feel about this week's episode — and more importantly, who's excited for Bailey's big wedding day on next week's episode?

Netflix
Never Have I Ever . . . Wanted to Be More Like Devi Vishwakumar
by Navi Ahluwalia 16 hours ago