As the title of this week's episode of Grey's Anatomy suggests, the moment the Seattle Grace residents have been waiting for has finally arrived: the boards. Jackson, Cristina, April, Meredith, and Karev are all gearing up for the big day, but they each have very different obstacles in their way. April is naturally freaking out, Karev can't get his mind off Morgan and Tommy, and Meredith comes down with the stomach flu at the worst possible time. 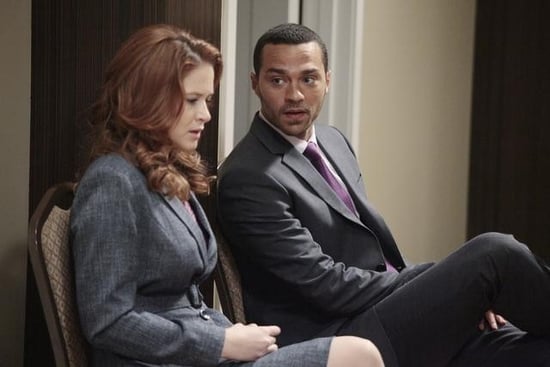 And then there are the doctors who aren't taking the test: Lexie is still taunted by her feelings for Mark, Teddy and Owen are at each other's throats, and Webber gives himself a break — with the help of Jackson's mom. Let's break down all the highlights of the episode when you read more.

With only a few episodes to go, it seems like things are finally starting to get juicy on Grey's. Were you surprised about April and Jackson? Which doctors do you think will pass the boards?

HBO
Obsessed With The White Lotus? You'll Love These Photos of the Cast Hanging Out
by Perri Konecky 16 hours ago

Madison Bailey
Listen Up, Pogues: JJ and Kiara Are the Real Outer Banks Endgame Couple
by Alyssa Grabinski 16 hours ago

Selena Gomez
Why Do Shows Still Think It's OK to Make a Joke About Selena Gomez's Kidney Transplant?
by Kelsie Gibson 19 hours ago