Things are looking vaguely Christmasy around Seattle Grace, but the only celebration the doctors are talking about on Grey's Anatomy this week is is Bailey's wedding. Unfortunately, the big day is bringing more jitters than cheer, and not just for Bailey. Sure, she's cynical and second-guessing her relationship every step of the way, but I was even more incredulous to see the impact that her nuptials have on her fellow doctors. 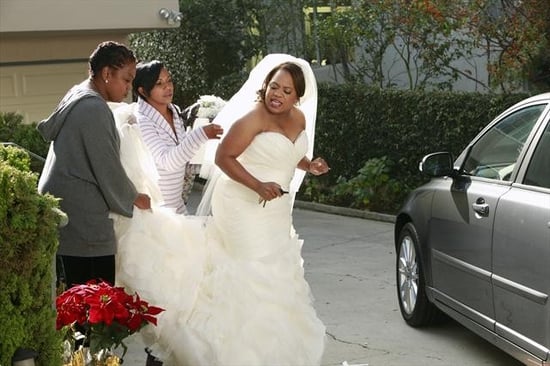 Arizona is nervous about having to wear flats to a black-tie affair, while April and Jackson are so skeptical of their ability to stay away from each other that they actually recruit intern dates. (Apparently a strapless dress really does it for Avery.) Meredith and Derek are also anxious, but not about Bailey's wedding; Derek is wary of letting his sister give up her nerves to help him. So does it all lead up to the white wedding that Ben's been dreaming of? Not exactly. Let's break down the biggest moments when you read more.

What did you think of this week's episode? Do you think Bailey and Ben will ever tie the knot for real? Is this the last we'll see of Adele?