Take it from the doctors on Grey's Anatomy: if you're having problems, the best way to deal with them is to push them far down into your soul until you're numb to them, so you can pretend they don't exist. Forget that your ex cheated on you! It's not OCD if you say it isn't! Who cares about those daddy issues? Denial is the name of the game this week, and we're seeing all sorts of it. The question then becomes: what's the lesson we're supposed to take away from all this? 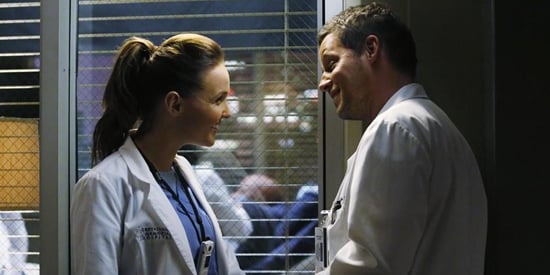 In the wake of Callie's one-off court trial that had no negative effect whatsoever on her career, she's decided to give things with Arizona another go. Meanwhile, Jackson and April are still at odds, Leah's a hot mess, and Grey looks like she's ready to rip Cristina's head off. Get ready to scrub in, because we're going over all the messy details after the jump.

So, what's the takeaway here? Is it that deep, emotional trauma only lasts, like, a week? Or is it just really easy to pretend it's not there? Let's hope it's more like real life, where everyone gets slapped with emotional aftershock a little ways down. If Grey's Anatomy is turning into a show that's all about emotional (instead of surgical) trauma, it has to be real.

Black-ish
Oh, Just 16 of Black-ish's Greatest Guest Stars Over the Years
by Annie Blay 19 hours ago

by Perri Konecky 56 minutes ago