Let's hear it for the boys! The ladies of Seattle Grace are MIA, allowing this week's episode of Grey's Anatomy to focus solely on the menfolk. Each of the male surgeons is dealing with some feelings of anger, whether it be in their career or personal life — but, as the episode tells us, that doesn't mean they want to talk about it. Ultimately, Derek signs up all of his colleagues for his house-building anger management program, and helps the guys hammer out their problems. Literally. 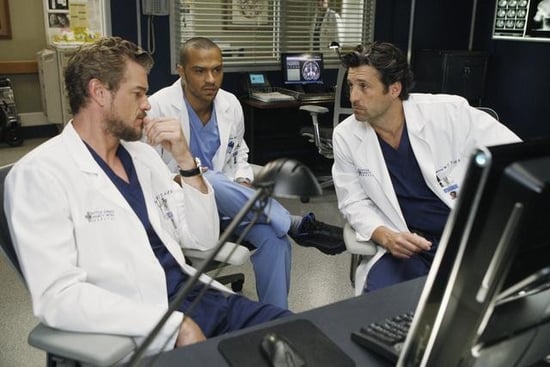 There are bromance troubles brewing with the patients too, as the latest disaster to hit Seattle involves a freak accident at a local comic book convention. You know what that means: zombie nurses, hobbits, and Game of Thrones references abound. It's one of the more comical episodes we've seen in awhile, which is a refreshing change of pace. Let's break it down when you read more.

What are your thoughts on this week's episode? Did you miss the ladies or was it fun to get a man's perspective for a change? Are you missing Lexie as much as I am (the girl has been gone all season!)? Tell me all about it in the comments.