Knowing that Eric Dane was leaving Grey's Anatomy does little to soften the blow of literally watching him die in the show's season nine premiere. We pick up 30 days after the surgeons return from the plane crash, the date in which Sloan is set to be taken off life support. The episode is littered with hints about what happened in the time in between, but we'll have to wait until next week for all the details (but really, haven't we suffered enough?). 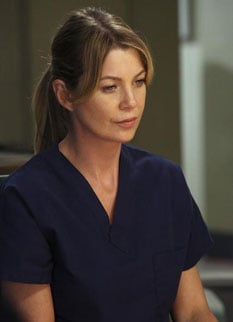 A new crop of interns is ready to take Seattle Grace by storm, but their attendings and residents are still wrecked from the tragedy du jour, making the hospital an emotionally charged (and generally uncomfortable) place to be. As narrator, Meredith's opening line is "dying changes everything," but we'll have to admit that despite all that's happened, surprisingly little has changed: Karev is still sleeping around, Meredith and Cristina are still in constant communication (with a long-distance relationship sponsored by Facetime), and it doesn't seem as though anyone's really leaving Seattle Grace after all — those who are living, anyway. There's a lot to break down, so let's get into it when you read more.

Am I the only one who is starting to feel masochistic for watching this show? I don't know how many more gut-wrenching episodes I can take at this point. What are your thoughts on the premiere? Were you shocked by Arizona's big reveal? Are you glad Karev and April are sticking around?