In Grown Ups, Adam Sandler and a group of his real-life friends (including David Spade, Chris Rock, and Kevin James), play a bunch of high school buds who reunite for a weekend, so you can probably guess what happens in the sequel — they're reuniting again! This time they've all gathered in their hometown, where apparently it's easy for a moose to just waltz into your bedroom and pee on you. Other things that happen in town? Frat guys (led by Taylor Lautner) can make you cliff dive naked. 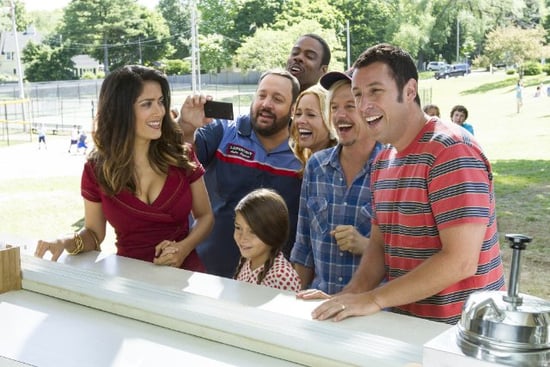 The original Grown Ups wasn't exactly comedy genius, so suffice it to say this sequel feels pretty unnecessary. That said, I fully support Lautner trying his hand at comedy, and it's hard not to giggle when half the cast of SNL shows up dressed as male cheerleaders led by Andy Samberg. The film hits theaters July 12, and you can watch the trailer when you read more.

by Perri Konecky 56 minutes ago