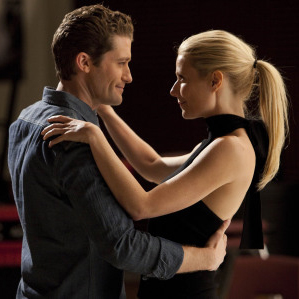 Gwyneth Paltrow isn't just a frequent guest star on Glee these days, she's also a guest star on Matthew Morrison's upcoming album. We recently heard a single off of the album, "Summer Rain,", and while that one was an original track his duet with Paltrow is a cover of The Wizard of Oz classic "Somewhere Over the Rainbow."

Unsurprisingly, Paltrow and Morrison's voices sound beautiful together, but I think I would have liked to hear them sing something a bit more unexpected. You can listen to the track here, and let me know what you think.