This week we got a peek at the first poster for The Hangover Part III, and now we get to see the Wolfpack in action in the first teaser for Todd Phillips's comedy. This time, Phil (Bradley Cooper), Alan (Zach Galifianakis), and Stu (Ed Helms) are reunited when Alan's father dies, and somehow they end up on the road to Vegas together, possibly with the intent of burning down the city. The teaser doesn't give that much away about the film, but it does give us a sneak peek of Alan's angelic voice, returning players Ken Jeong and Heather Graham, and new cast members John Goodman and Melissa McCarthy. 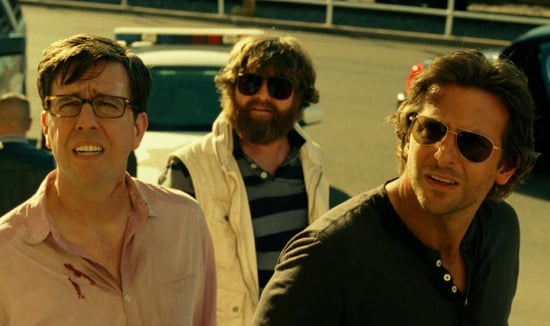 The Hangover Part III is supposedly the last film in the series, and I really hope it can recapture some of the magic and originality of the first one, because the second one was kind of a disaster. I'm also going to need a little more information before I can get jazzed about the movie. Like where did Stu's Mike Tyson tattoo go? And why are they even going back to Vegas? We'll get a full-length trailer before the film's May 24 release, but until then, you can watch the teaser after the jump.

Movies
Travis Scott Has a New Album and Movie on the Way, and We Are So Ready
by Kelsie Gibson 2 hours ago