These days, I tend to watch the late night lineup the day after it airs (it's why TiVo was invented, as far as I'm concerned). But ever since NBC tried to remedy the The Jay Leno Show's low ratings by proposing to move him back to 11:35 p.m. with The Tonight Show With Conan O'Brien at 12:05 a.m., I have never been more of a night owl. 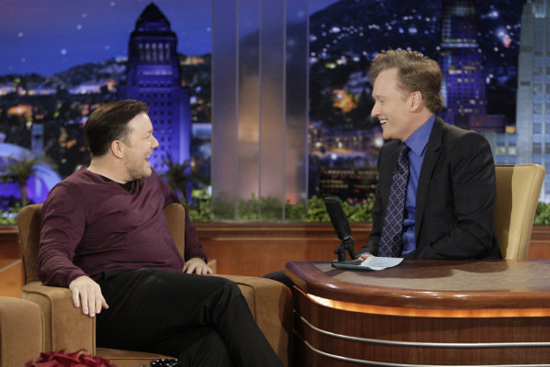 Though still on the peacock network, Conan hasn't shied away from irreverence. Last night he brought Kenneth the Page on the show to mock the whole situation, and he didn't hold back with guest Ricky Gervais. Meanwhile, Jimmy Fallon finally weighed in, while Leno commented on Jimmy Kimmel's impression of him. As a result, the ratings for the late shows are sky high, and I get it. I may be tired at night, but I'm not missing these shows for the world — what about you?