Melissa McCarthy and Sandra Bullock bring a lot of good to the ol' good cop, bad cop routine in the laugh-out-loud comedy The Heat. Bullock plays Ashburn, a straight-laced FBI agent vying for a promotion when she's faced with working alongside local Boston cop Mullins (McCarthy). Their mission: dismantle a vicious cartel of local drug dealers — without destroying each other first! (Cue laughter.) While neither actress goes too far outside her own range, they still make a highly enjoyable pair to watch on screen, especially once their personal barriers break down. The premise may sound familiar, but McCarthy and Bullock actually manage to put a fresh spin on the buddy-cop genre. 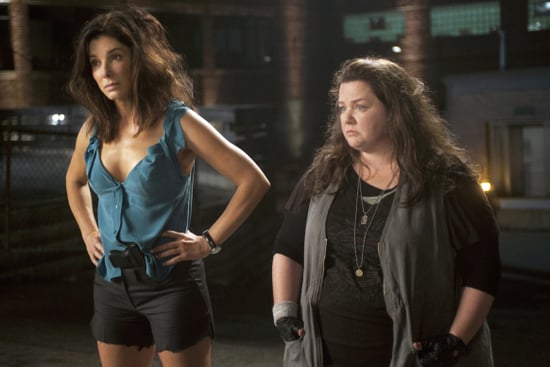 While initially Ashburn and Mullins don't take kindly to each other's tactics (Ashburn is a by-the-books officer, and Mullins would rather break the book's fingers), they're forced to work together when the stakes are raised and Mullins's family is put in danger. Mullins's dedication to her family runs so deep that she had previously sent her own brother (Michael Rapaport) to prison when she saw him getting mixed up with drug dealers. Now that he's out, he may be their only way into the cartel. It's actually pretty clever, and the family dynamic adds a genuine touch to the comedy. Find out what else I liked about The Heat — and what I wasn't so hot on — when you read more.

This is McCarthy's second time working with Bridesmaids director Paul Feig, and The Heat is more evidence that they make an amazing team. Her character is a variation on the same rough-around-the-edges roles we've seen her in before (see also: Identity Thief), but she brings a sweetness and a surprising depth to Mullins. Likewise, Bullock's character feels really similar to some of her past roles (The Proposal, Miss Congeniality), but it's the way these two work together that makes the film memorable. McCarthy's no-holds-barred physical comedy skills are on full display while Bullock's subtle line delivery is an ideal complement. It's definitely corny, but watching the two leads attempt to outdo one another in the field is still hilarious.

We've seen similar cop comedies before, and the story isn't necessarily mind-blowing. What is? The blood. So much of it, just dripping, spattering, and spewing. At one point Ashburn performs an emergency tracheotomy and slices into some poor guy's neck. But in a weird way it's kind of refreshing to see two female leads explore the kind of violence that's usually reserved for male-driven films. However, if you're queasy just reading this, then you may want to reconsider buying a ticket.

The Heat is a simple movie, but the fact that it doesn't attempt to jam a ton of extra elements into it is part of what's so great about it. There's no forced romantic subplot, no insane twists, just a couple of cops who want to put drug dealers away — and who, at one point, get really drunk together in a dive bar and dance with some old guys. It's pure Summer fun for everybody, except maybe for those with a fear of blood.

Animated Movies
Netflix's Over the Moon Is a Must See, but Here's What You Should Know About Its Heavy Themes
by Alessia Santoro 7 hours ago