Helen Hunt stars opposite John Hawkes in The Sessions, as a sex surrogate his disabled character hires. Hunt recently sat down with me and a few reporters to talk about her role in the film. She discussed her character, Cheryl Cohen Green, and why meeting the real-life sex therapist helped her performance. She was also frank about the nudity the movie required, as well as her reaction to seeing her costar Hawkes in a darker role in a different movie. Check out the interview below and look out for The Sessions when it opens in limited release this week. 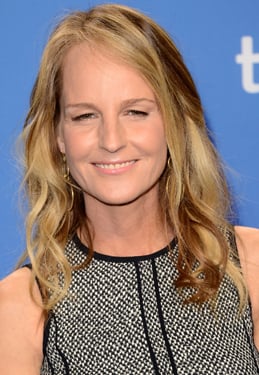 This was your first time working with John Hawkes, and it's a much lighter role for him. What were you expecting?
HH: I didn’t know what to expect because I had seen Winter’s Bone, but I didn’t think I was going to meet that guy; I hadn’t seen Martha Marcy May Marlene, which I am really glad I hadn’t seen. I saw it afterward and I was horrified.

When your character first meets Mark, she makes it clear that she's not a prostitute.
HH: Well, the first half, I think — when you do a biography, you get the essence of the situation. The essence of the situation is like, "Yes, we’re going to have sex; yes, you’re going to pay me; it’s not exactly like I need to be paid up front because I’m a hooker," so I think that was the spirit of the experience in real life and the spirit of the movie. And she makes a point, which I got from Cheryl’s mouth, which is, "I have nothing against prostitutes — this is just different," and I think the way that my character articulates that is pretty perfect. She says, "A prostitute wants your return business, and I don’t."

There's lots of nudity in this film. How did you mentally prepare for that part of the role?
HH: There was really nothing to do mentally to prepare. I mean, I did all of my homework for the part, which would hopefully distract me from the fact that I was going to be so very naked.

Read the rest of Hunt's interview after the jump.

Did you do any physical preparation?
HH: I got the part a couple weeks before I started, so all the cookie fasting in the world was not going to [help]. So I didn’t do that. Every time I wanted to worry about that, I just tried to prepare more for the part so I would be thinking more about that than about how naked I was. And the DP — the cameraman — was great. He shot Shine, this guy Geoffrey Simpson, and he’s lovely and soft-spoken, and I could tell he was going to be careful that I looked the best I could look, but also not be weird. More than anybody, the cameraman sets the tone on a set, so it all kind of came down to him. So I talked to him — that was one way I prepared. "Don’t let me look bad," and that was it.

You met Cheryl Cohen Green. Is it ever unhelpful to meet the live person you're playing when you're trying to get into the character?
HH: Sometimes it is, because you build a whole character, and [then] you meet the person and you’re like, I can’t fit you into this thing I've created. You’re playing them, but you’re not really playing them. In this case, it was the thing that got me really fired up about the part. I took the movie because I thought the story was beautiful. I didn’t really see what a good part it was at first, and once I started talking to Cheryl, more than the things she said, it was her vibe . . . a combination of how loud she talks, how frank her accent is, how like an excited kid she is about something sexual. Those two things together, that was very new for me, and I knew that the first half hour of the movie would be people going, "What is going to walk through the door? What is that?" I had to come in with something that was a surprise, and I thought being like her would be a surprise, so in this case, more than any other time I’ve played a real person, it was helpful.

You write, you direct, you act — what’s the next thing you want to try?
HH: Well, I wrote another movie, and I would like to get money from somebody so I can make it, which is very hard to do. So I would really like to do that. I’d like to write more: I have a novel that’s a mess and zillions of pages. I put it down whenever I work, and so it’s all in tatters, but that would be great when I’m 100 to finish that. If I found a great TV show, like a cable TV show or something, I would love to do that.

Are we going to get to see you do comedy again soon?
HH: Yeah, I mean when I get hired to do it.

Movie Trailers
The Craft Reboot Looks Like a Mix of Euphoria, CAOS, and Mean Girls in a Very Good Way
by Mekishana Pierre 6 hours ago

Halloween
Hello, Horror Movie Fans! Here's a Scary Netflix Streaming Schedule For All of October
by Kelsey Garcia 6 hours ago