Kevin James is known for playing lovable buffoons, but he shapes up (literally and figuratively) to take on a meatier role requiring less joviality and more focus in Here Comes the Boom. He plays Scott Voss, a one-time Teacher of the Year who has inexplicably fallen into a slump, coming in late for class and phoning it in with his students. He is ignited into action when his school loses funding and may have to cut extracurriculars. Scott takes on teaching classes at night, but when his measly paycheck doesn't look like it'll make a dent in the school's deficit, the former college wrestler elects to raise the money by training to be a mixed-martial arts fighter. It's a pretty implausible story, but despite its tepid first half, I was surprised to find myself rooting for Scott by the movie's close. Before you head to the theater this weekend, check out my reasons why this might be the film for you — and why you might want to avoid it. 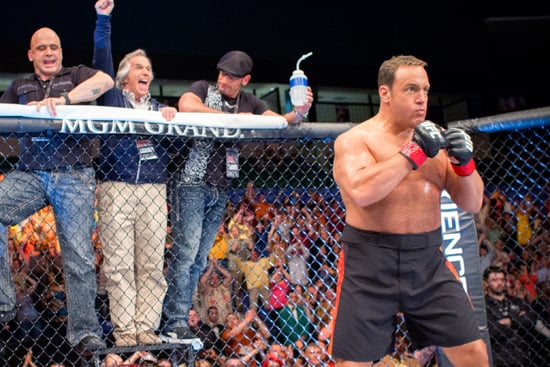 To see the reasons why Here Comes the Boom may not be for you, just read more.

Marsai Martin
Marsai Martin's Character Saves the Day in This Exclusive Look at PAW Patrol: The Movie
by Alessia Santoro 6 hours ago