After all of the drama (and the plastic surgery, yikes!), we're finally coming to a close for The Hills. We already said goodbye to Lauren Conrad when she left the show last year, but now it's time to send off Lo, Audrina, Kristin — and yep, Heidi — when the finale airs tonight on MTV. I've been following the series since day one, and though it's waned in recent years, I still get nostalgic over old episodes (remember these memorable scenes?). Take a moment to think back, and see if you can recall all of the tears, fights, and hookups that happened over the past six seasons with my quiz! 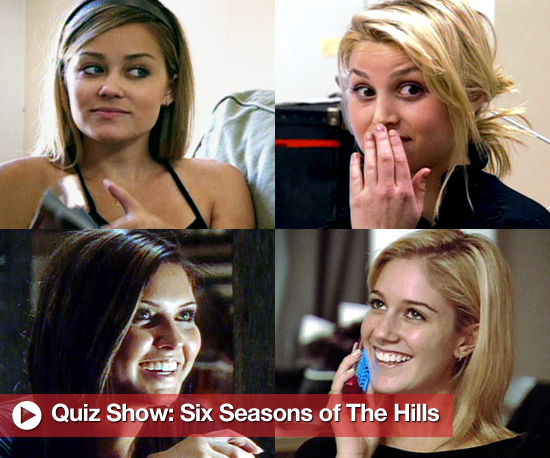 What is the name of Lauren's college in LA?

What was the name of Heidi's first boyfriend on the show?

What record label does Audrina work for?

In what club did Lauren and Heidi have their epic "You Know What You Did" fight?

Which celebrity's Oscar dress was Whitney wearing when she fell down the stairs?

True or False: Lauren's boyfriend Kyle Howard has appeared on the show.

What is the name of Heidi's Colorado hometown?

Which of the following names is not in Brody Jenner's cell phone?

Who did Spencer direct this sentiment: "You're making yourself cry, thinking about what you did."