The upcoming flick Hit & Run not only stars real-life couple Dax Shepard and Kristen Bell, but apparently it was inspired by their relationship. Let's hope they're talking about their dynamic chemistry and not the fact that Shepard plays a bank robber in the movie. The trailer for the comedy starts with the happy couple enjoying their morning together, then quickly gets serious(ish) when a dread-locked thug played by Bradley Cooper shows up at the door with some gangsters and a golf club. Turns out Charlie (Shepard) hasn't been completely candid with his sweetheart about his past as a thief, or the fact that he's in the Witness Protection Program. 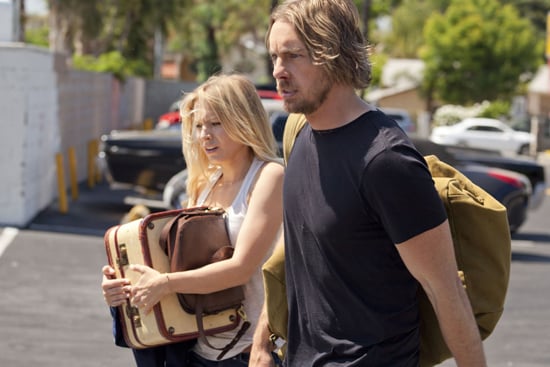 I'm fairly intrigued by this trailer, mostly because Shepard and Bell are so cute in real life and it seems to translate well to the big screen. It's also refreshing to see Cooper doing comedy without being his typical Hangover-style douchey characters. The movie comes out on August 22, but check out the trailer when you read more.

Hallmark
I Visit a Real-Life Hallmark Christmas Movie Town Every Year, and It's as Magical as You'd Expect
by Michelle McGahan 11 hours ago

Netflix
If You're Excited About Netflix's White Tiger Movie, You Need to Read the Book, Too
by Kalea Martin 13 hours ago