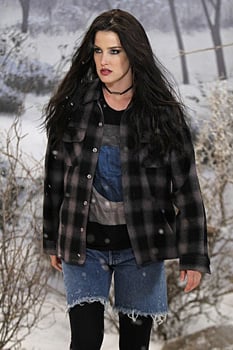 Are you ready to watch the moment grunge was born? At least according to Rush singer and fellow Canadian Geddy Lee, that is. This week's How I Met Your Mother introduces a whole new side of Robin: Robin Daggers. Turns out the show's resident Canadian has been hiding even more about her torrid past as a teen superstar.

When Barney finds the Robin Sparkles episode of Underneath the Tunes (that's the Great White North's version of Behind the Music), the gang discovers that soon after Robin Sparkles topped the charts, she turned grunge, much to the dismay of her entire country. She publicly denounced her name at the Grey Cup (think Super Bowl for Canadians) and released this ominous video — all for the love of one Paul Shaffer.