Vampires took over Comic-Con this year, and one of the biggest bloodsucker attractions was the CW's series The Vampire Diaries. We checked out the panel and also had caught up with Ian Somerhalder, who plays so-bad-he's-good vampire Damon. Somerhalder talked about where Damon's head will be when season three comes back, and what his relationship with Elena will be like. 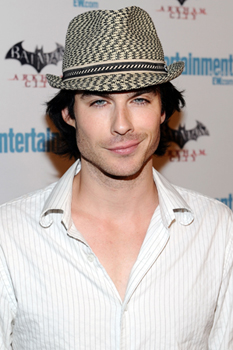 Is Damon going to change after his near-death kiss with Elena?
Ian Somerhalder: Probably not. People keep talking about this steamy kiss, and I don't know if anyone was paying attention, but Damon was pale, bleeding, and sweating profusely. So I'm not exactly sure how passionate it was, but he definitely remembers it. And I think that ultimately, he's pretty pissed off. For two seasons, he tried to get his brother to be what he wanted him to be, to just eat and destroy everything in their paths, which would have been fun . . . to sort of be who he really is. So he tried that for two seasons, [and] now Stefan's running around with Klaus — a dude that Damon absolutely hates [because] he tried to kill him — doing all those fun things he was trying to get his brother to do. And now not only that, Damon's stuck in Mystic Falls with this girl that he loves [who's] 150 years younger than he is, who a) doesn't want him and b) it's his brother's girl, so he ultimately can't just do that. I think he's really not happy with the way things have turned out.

How will he behave with Stefan gone?
IS: I think he's going to rise to the occasion, and I think he's going to have fun doing whatever it is. I mean, this is the guy that, whether he's ripping someone's head off or saving a kitten, he has the exact same grin on his face. He feels the same way about either one of those things. It's the thing that we were doing in season one, which is that push-pull, you know. It's like the alcoholic in the bar, how difficult that is. These guys are natural killers, that's what they do. If you put a mouse or a cricket in front of a kitten or cat, they're not going to just watch it, they're going to play with it. It's built in to the framework of their being. I think that push-pull is really what makes dynamic storytelling. Stefan has that push-pull with Klaus. He tried to save his brother, yet ultimately he's compelled and he's going along with the whole thing. Damon has the push-pull of wanting to destroy everything in his path and needing to protect this girl that he loves, and Elena has the push-pull of many things, poor thing — she's being pulled from every limb. But she gets something from Damon that she doesn't get from Stefan. They laugh, they throttle each other, they bicker. There's actually a line in the next episode where Alaric even says, "What are you guys, 12?" Because they have this kind of cute banter thing happening, and I think it's cool. We're going to start seeing these different sides to these different characters, but if people are expecting Damon to be this wearing-his-heart-on-his-sleeve hero character — ain't happening.

To see what Somerhalder had to say about Damon putting the moves on Elena, just read more.

With Stefan out of the picture, how long will it take for Damon to put the moves on Elena?
IS: That's a question I don't know the answer to. I think it's another fight — it's another push-pull for Damon. He doesn't feel very good about that. I think he's going to do what he's done in every other season. He's trying to distract himself, placate himself, so he's not firing on all pistons heading toward Elena.

So there are lines he won't cross?
IS: I don't know if there's any line he won't cross, but if he crosses them, he'll probably step back over.

When you read Kevin Williamson's dialogue for Damon and his great one-liners, do you crack up?
IS: I do. I truly love that man. He and Julie [Plec], I am so eternally grateful and in debt to. Unfortunately — those are the last two people you want to be in debt to, because they're crazy wicked smart and manipulative and wonderful. But Kevin has this thing where he writes so well for Damon, because I think in many respects — ixnay on the maniacal killer aspect — but there's a lot of Kevin in Damon. There's a lot of me in Damon. We just have a really profound relationship, and he just has this ability to write these lines . . . [it's] always so weird, how when writers write, you read the story, and they're inexorably always parallel with what's happening in your life. I think they pick up on that, because they know us so well, whether it's what they hear on dailies and stuff when we're not paying attention when we're miked, or when they read articles or see something about us. Maybe it's a little bit of insight they didn't know before — they use all of that stuff.

Halston
Halston: Take a Glimpse at the Real Luxe Pictures From the Battle of Versailles in 1973
by Stacey Nguyen 1 hour ago

Chase Stokes
Someone Pass the Windex, 'Cause Chase Stokes in a Sheer Fendi Top Is Fogging Up Our Screens
by Victoria Messina 7 hours ago