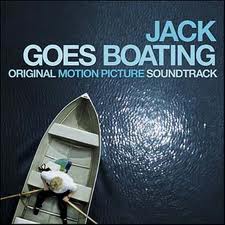 Opening in limited release this weekend, Jack Goes Boating is Phillip Seymour Hoffman's directorial debut. A drama about a burgeoning relationship, it's not just indie in regard to film genre; its soundtrack is stuffed with indie-rock cred as well. There are tracks from Fleet Foxes and Cat Power, but the movie's musical godfather is Grizzly Bear. The Brooklyn-based band collaborated on the score and provided one of their songs for their soundtrack, "All We Ask." From last year's album Veckatimest, the track is as emotional and gentle as I expect Jack Goes Boating to be.

Tom Hardy
The Venom: Let There Be Carnage Trailer Woke Up and Chose Chaos, and We're Thrilled
by Grayson Gilcrease 8 hours ago