Been crossing your fingers for Joel and Ethan Coen to take on the controversial world that is the early days of folk music? Great news. In the trailer for the brothers' new venture, Inside Llewyn Davis, Oscar Isaac (whom you may know from Drive and The Bourne Legacy) plays Davis, a struggling folk singer in a pre-Bob Dylan world. He's broody, he carries around a cat, and according to his ex (Carey Mulligan), he's a raging jerk. Garrett Hedlund, Justin Timberlake, a couple of Girls stars (Alex Karpovsky and Adam Driver), and Coen regular John Goodman also have roles in the music-packed period piece. 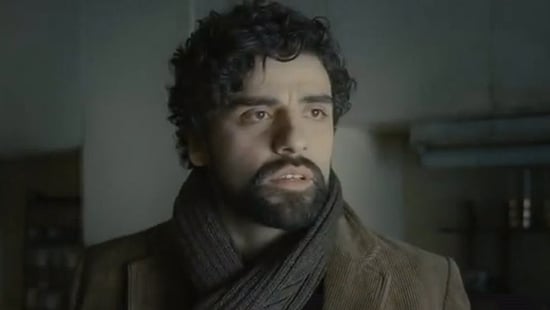 This trailer has a lot of elements I wouldn't expect from a Coen brothers film (an appearance from Timberlake being just one of them), and the '60s Manhattan vibe is a new setting for the filmmakers. I already love the intensity Mulligan is bringing, and I'm on board with Isaac as a leading man. We'll see how they fare when the movie hits theaters. Until then, you can watch the trailer after the jump.

Jamie Lee Curtis
Lock Your Doors! Michael Myers Is Back in the Suspenseful Trailer For Halloween Kills
by Chanel Vargas 2 hours ago

Janel Parrish
Janel Parrish's Hallmark Film, Holly & Ivy, Will Give You All the Feels: "It Has So Much Heart"
by Kelsie Gibson 5 hours ago