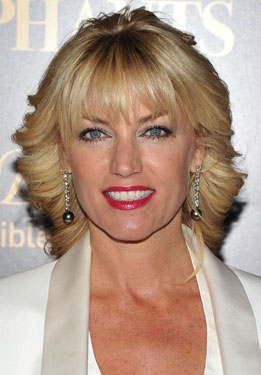 Donna Scott has a role millions of women would kill for in Water For Elephants. As bawdy burlesque dancer Barbara, she initiates Robert Pattinson's character into the circus — sexually! We chatted with the mother of two and wife of director Tony Scott this weekend, just before she headed out to the theater to see the movie for the first time. She talked about shooting under the big top with Robert and Reese Witherspoon, how Rob's family helps him handle his unprecedented fame, and filming her slightly awkward sexy scene with him! She also told us about training with a tassel-twirling expert for her risqué role, and what happened when a trio of zebras got loose on set and sent her, Reese, Rob, and Christoph Waltz ducking for cover.

Tell us a little bit about your character, Barbara.
She's a sideshow coochie dancer, a burlesque dancer, definitely targeted to the male audience going to the circus in the 1930s. There was one part [of the circus] that was for the family, and the other was the sideshow.

Was Rob nervous for your kissing scene?
Just a little bit. It’s really funny, because Rob is so...Rob. And even though he’s a huge heartthrob movie star, he’s so genuine. I figured since he was a megastar that he’d be like, 'Yeah, ok,' and I saw that because I’m older and lived a lot more life, I was comfortable being way more forward than he was. So, I definitely was aware that it was genuine, and that when I would move in to kiss him, he’d be like 'Whoa!' He was genuinely shy and it was all fantastic. How we prepared was just stepping into it and doing it. [He played] naïve and deflowered!

How does Rob rate as a leading man and kisser?
Rob, on a scale of one to ten, is a ten. He’s got luscious lips, and he’s so sweet, and he’s a tender person.

Reese told a story about Rob running scared from the zebras on set. Is that true?
After Reese had injured her ankle and when Rosie ran off, we were shooting this scene where it was just Reese, myself, Christoph, and Rob, and there were three zebras staked right near us. They’re very high strung, and they were going crazy and pulling up the stakes. Rob went running away and Reese grabbed Christoph and put him in front of her as a human body shield, and she was like; 'Oh my god, I don’t know what I just did!' And I was behind one of the support poles, and it happened so fast, it was really funny. But Rob was running away because he was supposed to be leaving to do something in the scene, so I think he didn’t want to break character. He felt so bad. He was like, 'Everyone is going to think I ran away because I was scared!'

To read more from Barbara on Reese's circus skills, how Rob's family keeps him grounded, and the way she prepared for her sexy role, just read more

Did you get to watch Reese perform with the elephant?
Yes. It was amazing, when she was in the center ring we were all there watching, and I got to watch her as she went on top of Tai. What an amazing experience.

Rob actually has to cross-dress for a particularly funny scene in the movie. How did he handle that?
I think he was genuinely really shy about coming out of that trunk. It was pretty funny for him to come crawling out with all of us eating our breakfast. And no one had seen him in his outfit, because his double was in there the whole time they were setting up. So when he came out of the trunk all the response to him was genuine. I think his response was genuine, too. He was really embarrassed!

Was there a lot of fandemonium near the set for Rob?
Every day. It was insane to me, because where we were shooting was so remote. We were an hour and a half outside of LA in these huge orange groves, and we’d be shooting nights, and when I’d leave work 4:00, 5:00, 6:00 in the morning there would be unbelievable amount of women in a ditch across the shooting area waiting for Rob. They didn’t leave. I was blown away. I’ve never seen that level commitment from fans until I saw all that.

How does he deal with that remarkable level of attention?
It’s remarkable how he deals with it. He deals with it immensely well, and I also think he can’t believe what’s going on. I think he stays really grounded, and I think he views it from a point of view of, 'Is this really happening in my life?' And all of the craziness around him and Kristen, I think they navigate it immensely well in how he handles situations. He’s so close to his family and they’re so grounded, his mom and his dad and his sisters, so I think that helps him. And the maturity. He's very well educated and very well read, but it’s lovely that he can be that mature.

How did you prepare for the role?
I’m a level four pole dancer at Sheila Kelley’s S Factor, and then I took burlesque classes. The choreographer, Tracy Phillips, is a dancer, and I had a private tassel-twirling instructor that came to my house to give me tassel-twirling lessons. I took it very seriously!"

Did you get to keep your burlesque gear and tassels from the set?
No, I didn’t, and it didn’t even dawn on me to keep them! The thing is, Penny Star Jr., when she taught me to twirl the tassels, she said there’s a trick to how they need to be built so they swing properly with centrifugal force. Penny Star built two pairs for me and sent them to the costume designer. It's still a secret.

What's next for you now that you're getting back into acting?
It was so fun to do a movie like this, completely removed and on my own. My desire is to really get back into my career because I’ve been raising my children for 11 years. We have twin boys. It was the first time I’ve gone and done a red carpet when it was not affiliated with Tony and it was a different ball of wax.