Jake Johnson plays Nick on New Girl, one of three roommates of Zooey Deschanel's Jess. Though Nick and Jess are just friends, there's a palpable sexual tension, and I chatted with Johnson about their relationship, as well as Nick's complicated friendship with Schmidt. He also talked about a recent experience of getting naked for the show and his role in cult video phenomenon Drunk History. Read on to find out what Johnson thinks of Nick and Jess and why Nick's so grumpy all the time. 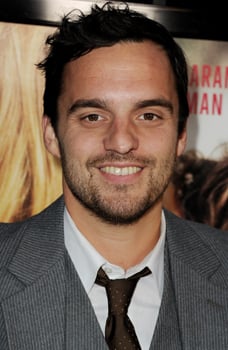 BuzzSugar: We saw some footage of you, naked, in an upcoming episode — how was the nudity experience?
Jake Johnson: Well, my nudity experience took place at three in the morning in LA near the ocean, and I was told to strip down until I was basically wearing cream underwear that were really tight, and I ran into the ocean. So my nudity experience was very cold, and very awkward.

Buzz: Was that your first time doing nudity?
JJ: No, we did an episode called "Naked," episode two, where I got pretty damn naked in that.

Buzz: But you're still covered somehow, so Zooey Deschanel has not seen you naked.
JJ: No, she hasn't officially seen my junk. But you can pretty much see the junk in those outfits.

Buzz: What do you think of Nick and Jess's relationship? Do you like them being pushed together?
JJ: You know, I don't think they're pushing us closer together anymore. I think there's something between the two characters, but I think they are — like in real life — if you feel a connection with somebody but also live with them, you don't actually want to do it, because it could get very real very fast. And I think that's where Nick and Jess are. I think they've noticed each other, I think there's an attraction, but I don't think either of them wants to have a live-in boyfriend or girlfriend, who they just met.

Buzz: What do you personally want to see happen with them?
JJ: To be perfectly honest, I don't really have an opinion. I really like acting with Zooey, and so if the characters got together and I got to do more scenes with her, I'd be thrilled to do it, but in the longevity of the show, I understand keeping them apart. But it's really fun having the Nick/Jess relationship, so if it went in that direction, I would enjoy doing it. And if they just kept the fire burning for longer, I also really like working with Lamorne (Morris) and (Max) Greenfield, [and] all these great guest stars. My character starts dating Lizzy Caplan, who plays Julia, and she's such a blast to work with.

Buzz: What do you think would happen if Nick and Jess dated but broke up?
JJ: I think it would be very hard for him. I think she would get over it before he would. Nick's really sensitive; I think that's one of the reasons why he's such a grump and he's mean about everything. I think because he overfeels things, and I just think if they got together, he would think they were getting together for keeps. I think Nick's in a part of his life where he's looking for things that are real and things that are grounded. I think that's one of the reasons he gets so mad all the time. He wants to believe in things. So I think if they started dating and she broke up with him, and they had to live together and he had to watch people come in, he'd go nuts.

Buzz: Does Nick have a passion for something we don't know about yet?
JJ: I think Nick's a passionate guy, but I don't think he's got something specific yet. I think when he finds what it is, he's the kind of guy who would jump in head first and get really weird with it, but he hasn't found it. Nick's the kind of guy who could get swept up in a cult if he didn't have such good friends. If he believes in something, he could just jump in and get weird. But he doesn't know what that is yet, and so that's one of the reasons he's so frustrated all the time — because he can't believe he's 30 years old and broke and doesn't know what he wants to do.

Buzz: What is the nature of his friendship with Schmidt?
JJ: I think the thing with him and Schmidt is, it's very much like they're an odd couple. And I think in a weird way they have their own little relationship. They're old friends, so they've known each other when they were different people, and they formed their connection when they were different people. So now they've changed, like Nick will say a lot, "You're so much worse now," and Schmidt will call [Nick] a loser, so they know what the other guy used to be, and they don't always agree with what the other guy's doing now, but it's almost like family, like cousins. You're always going to love them, and I think they'll be friends forever, but they really piss each other off a lot. They're the kind of friends that could fight and then get over it.

Buzz: When did Schmidt and Nick meet?
JJ: They met on the first day of college. That's going to be discovered, I think, in the next episode. There's a flashback when Nick first moves in.

Buzz: I know you're involved with Drunk History; are you going to be in any more of those videos?
JJ: I hope so. I was with [creator] Derek Waters today. You know how it started? Derek was at my house, and we were getting drunk playing quarters heads-up, and I've got an Otis Redding story that I believe to be true. And I told it to him, that I took some time to tell — I was smashed. It's one of those stories that I think is awesome. I told that story to Derek, it probably took me 25 minutes. So I told him that story and the next morning he calls me up and goes, "Hey man, can me and Jeremy" — Jeremy is the guy who directs it — "come over, I'll buy you a bunch of booze, and will you get smashed and tell that story on tape?" And I go, "No! Why?" So I go "F*ck no, dude, why?" And he goes, "Look, I think there was a lot of truth to what you were saying, but there was also a lot of bullsh*t." And he goes, "I want to film it, and I want to get actors to re-enact it, and I want to get a guy who plays Otis Redding, who goes 'Come on, man.'" And I was like, no, no. And he goes, "If I do it, will you be one of the actors?" And I was like, of course. So he got our other buddy Mark Gagliardi to do it, and me and Mike Cera jumped in and did the first one.

Music
Saleka Describes What It Was Like Collaborating With Dad M. Night Shyamalan on a Song in Old
by Kelsie Gibson 43 minutes ago

by Corinne Sullivan 36 minutes ago