Jennifer Morrison plays Emma on Once Upon a Time, the show's reluctant heroine who has been chosen to break the curse of a town full of fairy-tale characters. I chatted with Morrison about the series, and I had to know how she felt about Graham's shocking death and whether we'll ever see him again. We also discussed the upcoming tales we'll get to see on the show, including the story Morrison would love to see play out. Read my interview below, and if you want to catch up with the show, you can watch episodes online here. 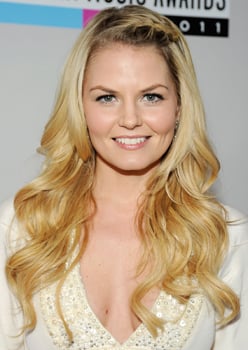 BuzzSugar: We were really upset when Graham died; were you sad when you found out it was going to happen?
Jennifer Morrison: Well, we knew what was coming in the story line since the beginning of the season. But all of us were upset because we love Jamie Dornan, and I thought he was just absolutely fabulous in the show. We all were very close, you know? So it felt like a huge loss, not just on the show, but just personally. We were all really close friends, and we still feel that loss. It feels weird with him not being in Vancouver with us.

Buzz: Is there any way that Dornan might return?
JM: The thing is, just because he died in reality doesn't mean that he can't return as the huntsman, because those are flashbacks. So, depending on the structure of the show, and the story we decide to tell, as far as I understand, there's room for him to exist still in fairy-tale land.

Buzz: With him gone, is Emma getting another love interest?
JM: Well, this last episode that aired, there's a stranger that comes to town, played by Eion Bailey, who is in that very last scene in that last episode that aired. I don't know for sure where they're cutting this at, but I know that there is a possibility that this stranger in town could somehow be connected to Emma at some point. Beyond that, I don't really know.

To find out what else Morrison said about the show, including the fairy tale she hopes to see on Once Upon a Time, just keep reading.

Buzz: What fairy tales are coming up on the show?
JM: I know Little Red Riding Hood's story gets told, and they go back into Snow White and Prince Charming's story and reveal more in their fairy-tale stuff as well. Those are the major ones that are coming up in the next few episodes.

Buzz: Since Emma is only part of the real world, do you ever get jealous that you don't get to shoot any magical fairy-tale scenes?
JM: Obviously it's fun to look at all the pictures from when they shoot in fairy-tale land, and everyone looks beautiful in the gorgeous costumes, but I'm so in love with Emma. I really just love playing Emma, and I have such a good time playing her that I would never wish that away just to have pretty costumes. I'm just really enjoying her right now, and also selfishly, when they shoot the fairy-tale land stuff, I usually get a day off!

Buzz: Do you think more characters will have the same kind of breakthrough that Graham did, where they realize they had another life?
JM: Yes; I think that so much of the whole idea of Emma being in town and being the chosen one to break this curse is that, without her realizing it, her presence and her relationships with people are going to start, in different ways, sparking things. Sometimes it'll be in ways that people actually remember things, and sometimes it'll be in ways where someone just starts to become more of a truer version of themselves rather than a cursed version of themselves.

Buzz: What do you think of the relationship between Emma and Mary Margaret?
JM: I think it's fascinating and I think it was a genius idea on Eddie and Adam's part — Eddie Kitsis and Adam Horowitz, the showrunners — because I think all of us have had those moments where we think, "God, what would it be like to go back and be friends with my parents, before they had kids, and before they had to be parents?" This is the ultimate exploration of what that could possibly look like. Emma doesn't for a second think that Mary Margaret is really her mother, and so she definitely has this very natural friendship with her, which in some ways is very alarming, because Mary Margaret is so pure and so true and seems to just be nice to her for the sake of being nice to her without ulterior motives. And I don't think Emma's really come across that in life. And because Emma's been so damaged and so hurt and so isolated over time, this is really new for her to have this kind of relationship with another woman and I think it does very naturally feel maternal in some ways. It is fun to find those times where it feels like we're just friends, and times where she feels like the mom and I feel like the kid, or I feel like the mom and she feels like the kid. We're always playing around with that dynamic when we have those scenes together.

Buzz: Are there any fairy tales or characters you'd like to see on the show?
JM: We all keep bugging them to do Ariel from The Little Mermaid. We're trying to figure out how they're going to work a mermaid into the show!